Last weekend took place the 4th round of Belgium 1/8 On-Road Championship.Without time to rest after the Euro Championship in Valencia, Robin D’Hondt, managed to take the victory in a hard racing day, clearly conditioned by the scattered showers and changing weather.Here is the full Chornicle:

Last weekend the 4th round of the Belgian Championship was held at the track of Roeselare. I came straight from “every day 35°” Spain to “4 seasons in one day” Belgium. The weather forecast wasn’t so good for the weekend with sunshine turning to wind & rain and then sunshine again, so grip was changing every hour.On Saturday I was curious how my setup from Spain would work on Roeselare … and like I thought, not really. Springs much to hard, and no stability all around.As I was driving purple all around and front shocks in middle hole I went to all blue springs and moved front shocks in highest hole. After I changed this it started raining and I couldn’t try anything anymore. 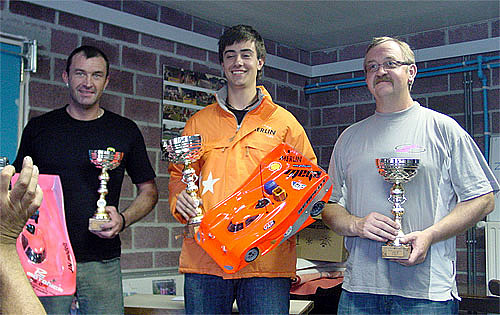 On Sunday the first qualifier came up and while I was racing I was thinking of what I could change on my car because the fastest laptime I was driving was 14.4 and last year it was 13.6 so I was way off the pace.For the next heat I just changed the whole setup of my car. I tried to find a setup in my head that was just easy to drive and fast. I like to drive with a car that has much stability in the back so I went to red springs in the back, blue in the front, 45W in front, 40W in rear (was driving 45 all around), rollcenter in front 1 mm down, expodential in my transmitter from 0 to -10, and from 2 toe-in to 2.5.  Once again it started to rain so the second qualify round was literally flushed away.Third heat and there was no grip at all so I thought maybe my setup would work … and it did.Car felt good, constant and fast enough to set the pace but then after 3 minutes of racing it started raining for 30 seconds or so.  This ruined my chances of TQ but I still took second place on the grid.While we were training just before the final it started to rain but on slightly.  This is how it had been all weekend – Rain for 20 minutes just enough to make the track wet and then it stops and dries again. So it wasn’t wet enough for rubber tires. I tried 33 shore but for this is it was to wet.  I told my dad to put aqua tires on and take my car to the grid. As the countdown began I was looking to the other cars to see what tires they had on. Gunther Van Staey on TQ had rubber tires. Some parts of the track were still dry so after one lap racing I took over the lead and drove away from the pack while Gunther was struggling to get his car around the track. 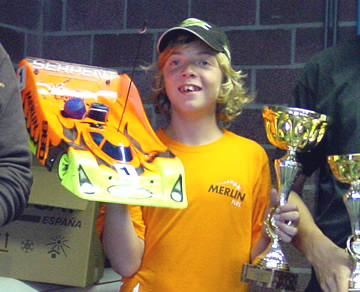 I stayed in the lead for the entire race. Gunther was most of the time in second I think but in a tire change all went wrong and he lost many laps. For me the last pit stop my dad asked me to put 33 shore again because the track was almost dry.But I thought for the last 4 minutes … why change tires and risk something going wrong. Leave the tires on and I will drive safely … uhum, wrong choice, as I was driving trough slow corners I took a good look at my front tires and was thinking isn’t there supposed to be black there?I saw white spots where there used to be black … weird … my car was suddenly on the surface and I was driving on my rims. So the last 2 minutes I came in for the 33 shore (I had 5 laps in front of the second). With these 33 shore tires I drove the fastest lap of the race, almost 4 seconds faster then the fastest laps of the other drivers, and took the victory.

F2 class it was young driver Daan Haling who set the pace in a dry race with his Serpent.

would like to thank my sponsors for all what they do and for the good support in Valencia:Serpent Motorsport, Mega, ATS tires, Merlin Fuel, Ghiant Aerosols RC Car Colors and RC Tech.And special thanks to my 3 mechanics, my dad, Lode Haling and my girlfriend.Greetzzzzz

Info and pictures from: Red Rc and Serpent.