The Euros 2102 has finished in Austria with the following result. 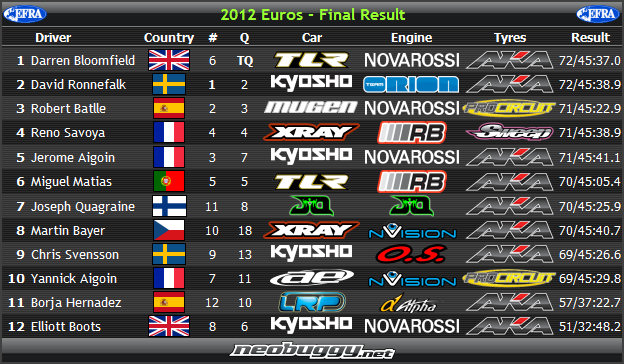 A Thrilling final with a hardly disputed 4 laps. Robert Batlle suffered a flameout in pit box, that made him lose too much time to dispute the 1st podium place. So that, together with his team, they decided to keep a consistent peace to secure the third position, and set a comfortable gap with 4th classified (R. Savoya).

This Neobuggy video shows the last 4 laps of the final.

So that Robert could not revalidate the last year victory in Germany, but his 3rd place keeps him in the top of European Off Road Specialists.

There is an exciting World Championship to follow in Argentina. 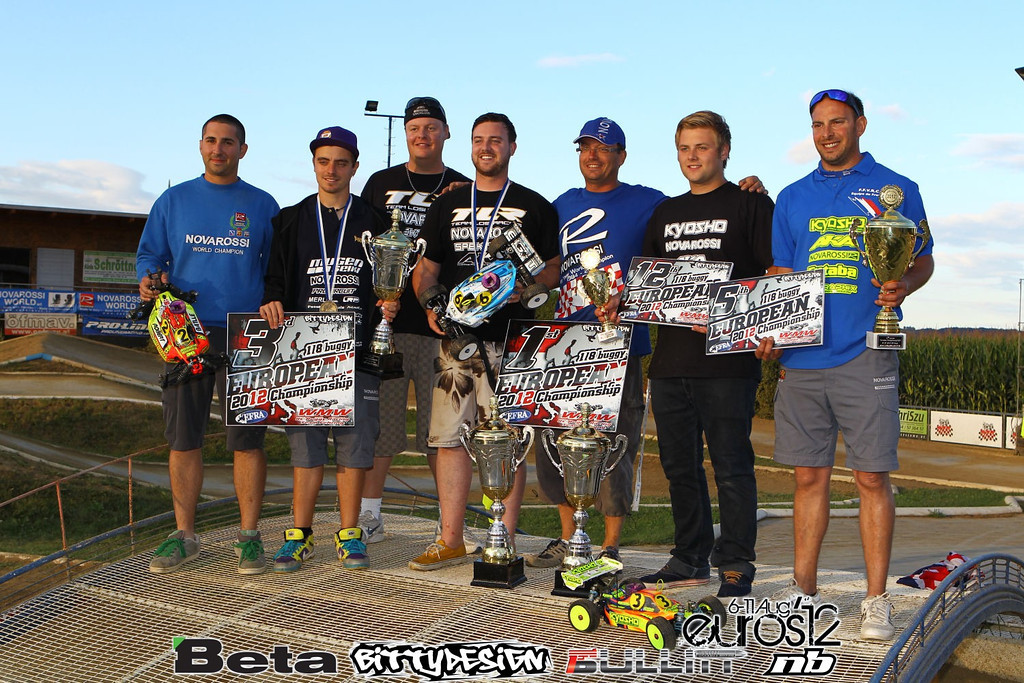 Last Sunday took place the 4th round for Netherlands Nat Championship at Appingedam. 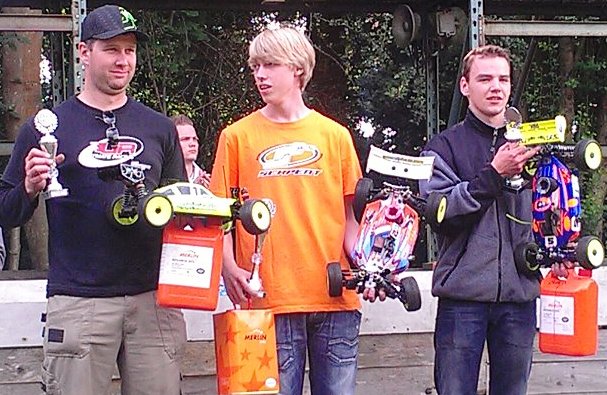 The First Edition of RC Show 2012 took place last weekend at the Fuencarral Track in Spain. With typical Spanish sunny weather, this Open International event brought the top national drivers in this category as well as those from other countries. RC Show´12 was a three day event, with controlled practice on Friday, qualifying on Saturday and the mains on Sunday. Also on Saturday evening after the qualification rounds, Mike Truhe and Kevin Gahan from TLR put on a great exhibition with the Losi 5T while Spanish pilot Julio Memba also put on a 3D helicopter exhibition for the crowds. Portuguese driver Miguel Matias topped qualifying and was TQ on Saturday but after Sunday’s semi finals it was the Spanish driver and current European champion Robert Batlle who put his Mugen in the top position and would go on to win, followed by TLR´s Mike Truhe with Agama driver Dani Vega completing the podium. 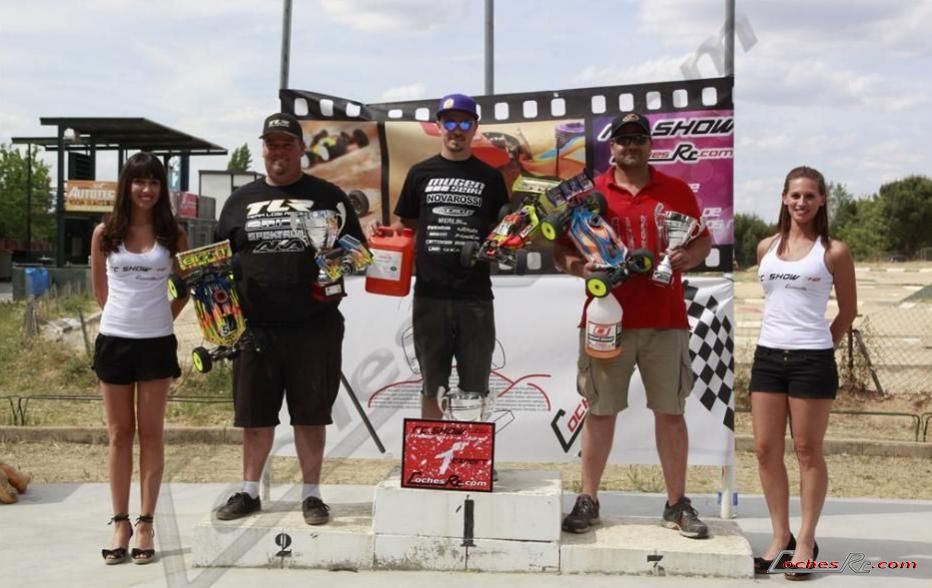 We have pleasure in introducing SS-Factory inc. as new Merlin Fuel Dealer for Caribbean Area.

SS Factory is a professional Importer based in Puerto Rico.

They will take care of the whole Caribbean area.

We hope with his help, Merlin Fuel will be a popular RC product in such a nice area.

The second Round for Spanish Nats 1/8 On-Road was held in Elche track, in Alicante area, managed by Club Carsol

Was a hard race, with temperatures over 35ºC, 50ºC on the asphalt and a high relative humidity. A hard test for engines and fuel.

Elche track is small, but really fast. Laptime is just about 12 seconds.

After winning the semi-final, Cabezas kept the first place during almost 30 minutes, closely followed by Sergio Montensinos, who managed to took the first place in the tire change.

Oscar took again the first place after a few laps. A few laps later, Montesinos had glowpug failure, and Cabezas, who was driving with no brakes after a crash with Montesinos could set a comfortable and safe pace to finish the race in first position. 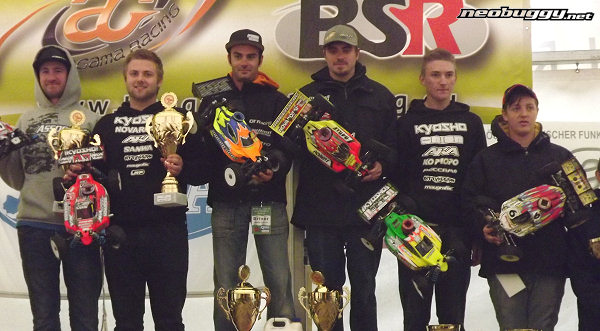 The Neo race finished last Sunday with the following result:

The main final was clearly dominated by USA with 7 drivers between the TOP 15. Robert Batlle who had an incident on start managed to finish on 6th and was the first European and only Mugen in honor position. 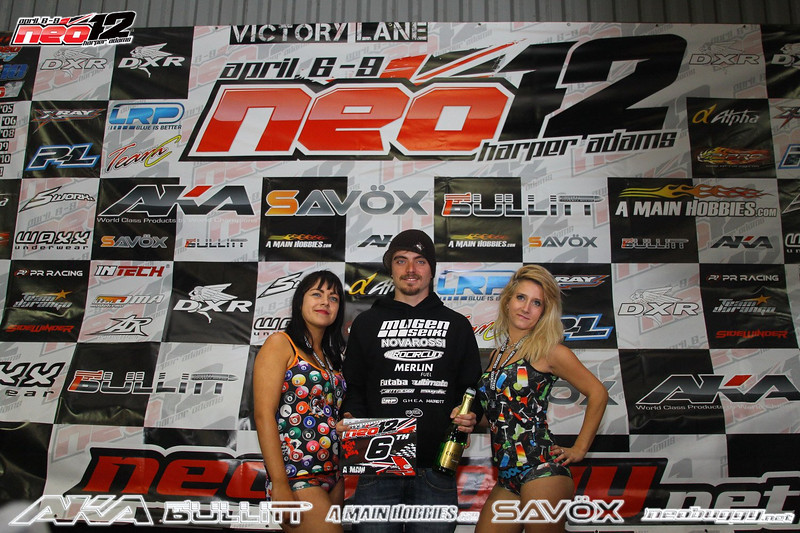 Pics and info from Neobuggy.net

It is a pleasure for our company to announce that multiple Spanish 1/8 On Road Champion, and European Finalist Oscar Cabezas will continue to collaborate with us.

During these years of cooperation, Óscar powered by Merlin fuel has won 2 Spanish Championships, and has been European finalist in both 1/8 and 1/10th classes. 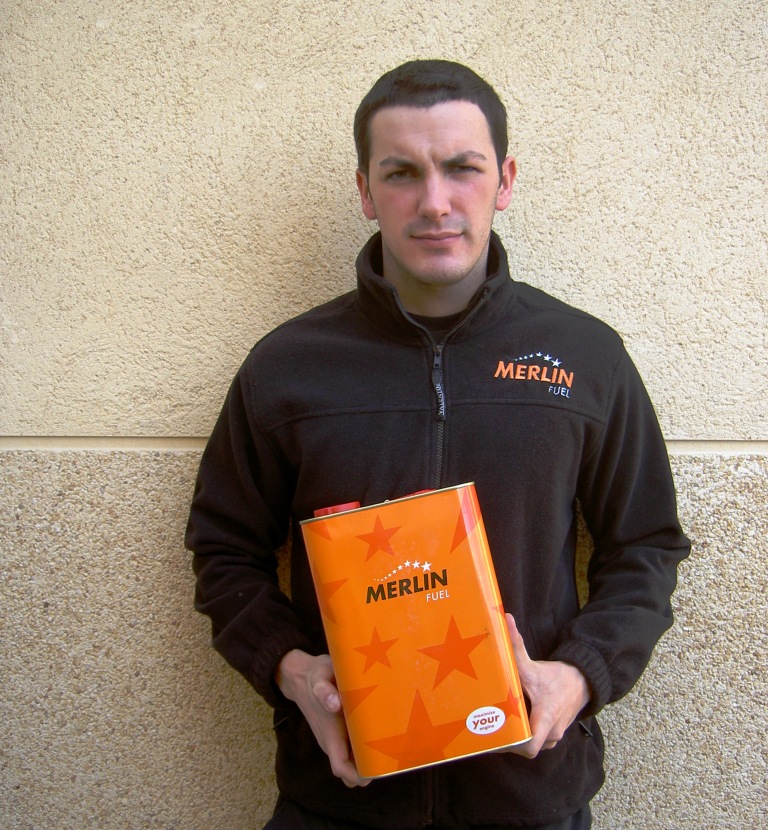 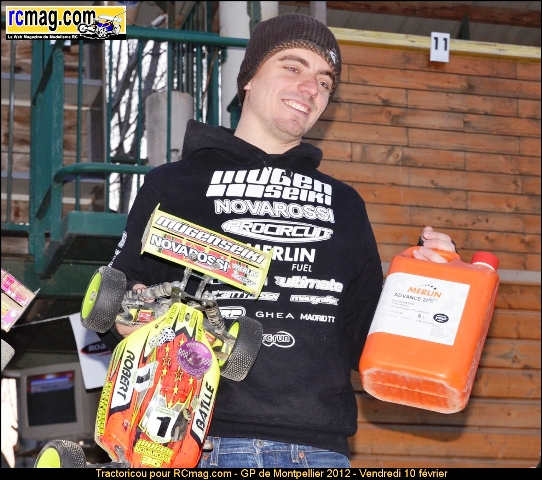