First round of qualification it was Bart Mullink who took the first place just 0.2 seconds behind him was Kay Koops.
Second round of qualification it was serpent driver Kay Koops who took the fastest time 2 seconds behind him it Was Bart Mullink who struggled with traffic.
Third qualification round Bart Mullink took the fastest time and TQ with 12 rounds in 5.18 Kay also run 12 rounds in 5.19, so the difference were very small.
In the semi final B kay koops run true on easy win with 2 laps on the entire field, semi final A was won by JQ driver Jorg Van Leuken.
In the main final it was Kay who started from pole jorg from 2 and bart from 3. 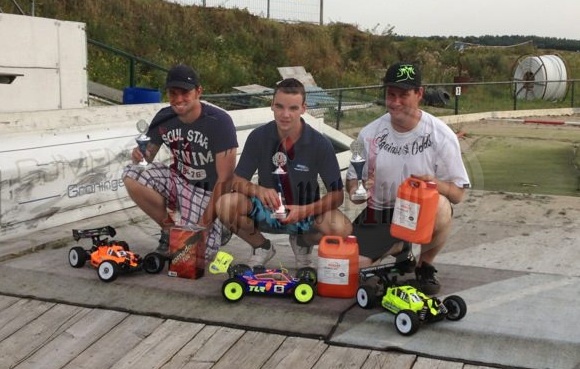 In the beginning kay had a free track and could easily get away after 9 round it was kay on 1 Bart on 2 with already a half lap behind and jorg on 3.

Kay was just driving his laps and bart tried to come closer and made a few mistakes after 25 minutes of racing it was still kay leading bart second and jorg third.

Kay was just making his laps very consistend and fast, but after 28 minutes kay his car broke and fell out so bart was leading Jorg was running second and serpent driver Jeffrey Halsema took the third spot

Congratulations to the winners

Text and pic from Buggysport.info