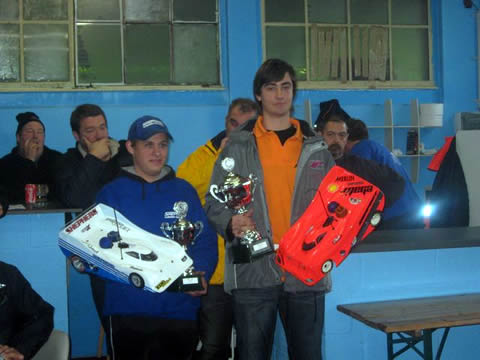 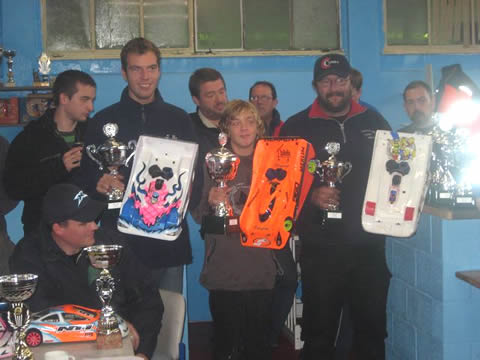 «The 6th and last round of the Belgian championship was also held at the track of Charleroi, the original idea was to have this race at the track of Bierset but sadly enough the track had to close its gates for an airport expansion.
Friday evening we arrived there, rain was falling out of the skies. Think the gods don’t like me or so, 6 Belgian championships this year => 6 times rain on Sunday or Saturday … Great!
Saturday when the track was finally dry, qualifications had to be run. So I nearly had no practice time.
First qualifying suddenly my personal transponder didn’t work anymore … As I wasn’t the only one with a «sudden» dead transponder I knew it couldn’t be broken. But ok, after changing some setup things in the computer of the lap timing all worked fine again.
Second qualify my engine was a little bit to lean so I had to come into the pits. I drove 5th time because of the pit stop but I did have fastest lap time with 13.9.
Third qualify was driven on Sunday morning. Wet track … and like this it stayed the whole day.
Most people were packing up their stuff to go home. I was unpacking around 2 in the afternoon to drive the final. Many people with a weird look when they saw me unpack, but why not … the last race of the year. My position in the championship wasn’t gonna change whether I drove or not. Just wanted to have some fun but I do have to admit Werner Smolderen had to convince me to drive the final.
When the final was getting closer I saw that Tom Smolderen and I were about the only ones of the 1/8 F1 that were planning to drive…
In the Final Tom and me had much fun, I won the final and Tom ended up second.
So with 4 wins and 2 second places I am Belgian Champion 2008 1/8 F1
In the 1/8 F2 final youngster Daan Haling (son of my second pitman) won the race and is the Belgian champion F2 2008.
I want to thank all my sponsors for all they did for me during the year:
Serpent Motorsport, Mega, ATS tires, Merlin Fuel, Ghiant Aerosols RC Car Colors and RC Tech.
Special thanks to my father and Lode Haling for the good pitting during the whole year. »